Wildfire Recovery: The Nuts and Bolts of Resilience with TurkeyTail Farm

Farmers Cheetah Tchudi and Samantha Zangrilli run TurkeyTail Farm in Yankee Hill, California. This is a diversified farm with vegetables, mushrooms, flowers, livestock, and other value-added products. During the Camp Fire in Butte County, they were evacuated for 28 days and lost everything but their livestock to severe fire damage – including their home.

After 28 days of being evacuated Samantha and Cheetah were able to return to their farm. Once they got there, their recovery really began, having to figure out how to still produce and live on our land without having any basic resources, like electricity and water. Here are some of the considerations that they shared after reflecting on their recovery, as well as some tips on how to build resilience into your farm while rebuilding. If you haven’t already, read Part 1 of this blog post series.

In the wake of this disaster, we’ve joined a local group through the Butte County Resource Conservation District, which has started a coalition of landowners that want to do controlled burns on their property. So neighbors help neighbors get fire safe. We also hope to create a neighborhood coalition of people that are planning on staying to the next fire and being able to network. *Note: Farmer Campus does not condone staying and fighting. Please follow all evacuation orders.*

Build Community Wildfire Resilience: Join or start a Fire Safe Council in your neighborhood and check out the Fire Adapted Communities Pathways Tool.

Before the fire, we did not have farm insurance. We found it very difficult to find somebody to insure us, so we kind of just left it at that because we had other things that we were concerned about which took priority. But since this experience, we have been very adamant about finding an insurer that would carry fire insurance for us. I actually had two agents working on our case and it took them about six months to finally find one person who would insure us! It definitely is difficult to find people who will insure you, but I encourage all farmers to research it and do as much as you can to be insured because it really will help you out when you have nothing and you need something to live off of.

Not sure where to start with insurance? Check out our three-part video series on Insurance for Small Farmers with wildfire in mind.

However, we were lucky enough at that time to have some insurance through Cheetah’s parents because they live on the same land as us. Because of them, we were able to have resources to rebuild because we had some money available. We definitely recommend getting insurance for your farm if you haven’t yet because it will pay out in the end.

We’ve focused a lot, post-fire, on building redundancy to prepare for the next wildfire. In case something breaks, you’re able to get around the problem or fix it. We came back to the farm after the Camp Fire having to basically rebuild the farm from scratch, so we’re doing whatever we can to help prevent this type of thing from happening again and being more prepared for the fire season.

Water Storage: Part of that is having extensive water storage.  One of the things we are doing in order to prepare not only for fire season but for our farm, in general, is to punch a second well because a big part of why we left and why we actually evacuated is because our well was dry and we were buying water, so we had no water really on site. Because of this wildfire event we’ve done a 180 and built-in redundancies to always have water on the property and now think about how we can always think about the second one. How can we always just have water for our livelihood?

Now we have two separate 5,000-gallon tanks, and we have a swimming pool that holds another 14,000 gallons of water. Dollar for dollar a swimming pool is about the most inexpensive form of water storage you can get – it cost us a little over $1,000. It’s outfitted with a sand pump and comes with a recirculating pump. So what we’ve done is plumbed it to have a hose bib so we can take one of our generators, plug it into a pump and be able to pump directly out of this pool for firefighting applications or for irrigating livestock. Firefighters will appreciate that they have any number of ways to get water out of tanks when defending your home. 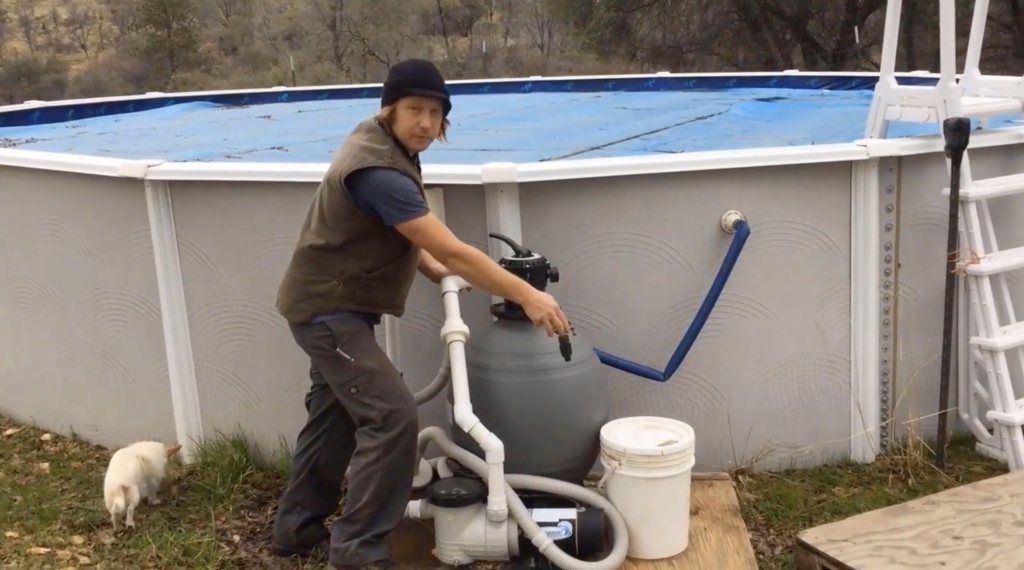 We also separate the waterline on the tanks so that we can always keep one 5000-gallon tank completely full and the other one is our normal everyday operational tank. We’ve added an outlet for gravity feed in case the power is out and we don’t have the option to pump water. In addition, we have multiple small tanks that we can load onto our trailers or place out in the field to have a different distribution site for water. We have an additional 2500 gallons that we’ve placed at the absolute highest point on the property, so we can gravity feed from this during emergencies.

Power: We also have auxiliary tanks that can be moved around the property for firefighting applications to power our pumps during either power outage based on PG&E’s wind policy, or during the fire event during which your power inevitably will go out.

We have multiple generators that can power not only our main pumping station but also multiple mobile pumps that we can use for firefighting, animal irrigation, or sustaining our crops during the power outage. We do this via a transfer switch for our main pump house. Basically, this is an electrical device that will separate your power from the grid so that you’re not back-feeding into the grid with your generator. It allows us to run our own pumping station with just gasoline-powered energy. It’s a 120-volt pump so it can be run off of our smaller Honda generators. It’s just great to be flexible.  Backup power is a central part of the farm for everyone now that PG&E have settled on their policy of turning off the electricity anytime the wind blows – we all need to be prepared at all times for the power to go out. In the case of a forest fire, I guarantee your power will go out immediately. And you need to be ready for that.

Watch: Cheetah goes into detail about his preferred tools, types of generators, and power backups in this video tutorial.

The next thing we wanted to address here is preparing and reducing fire severity [which is a quantitative measure of the effects of a fire on the environment, typically considering both the damage to vegetation and the impacts on the soil, different from fire intensity]. We have spent a lot of our time clearing brush in preparation for forest fires, and have been supported by the Natural Resource Conservation Service (NRCS) Environmental Quality Incentives Program (EQIP).

What we are trying to do is create a forest that’s going to burn in a healthy way by lifting up those lower fuels. This way, the understory will burn and hopefully not get up in the upper canopy of our trees and kill them. For this we use:

We also use these tools to keep our driveway accessible so that firemen can readily just drive right up and in giving your gate codes to those important facilities like firemen and the police department and even Wildlife, Fish and Game.

But a big part of reducing fire severity for us is just the same old regular jobs. We use the chainsaw to make lots of brush piles to control burn and then get our animals onto that acreage as much as possible because not only does it bring down the grass, but it also fertilizes the ground, and then when the rain hits after a big storm or a big fire, you’ll have amazing fertility. That’s definitely one of the things people were telling us when they came back to the land after the first rain was, “Wow it looks great out here!” We are so adamant about making sure our animals are well taken care of and are grazing all of our lands meticulously, which did really help when it came to the wildfire.

So those are our top adaptations that’ll be put to the test I’m sure –  it seems we’re in a new era of fire here in California. Fire season doesn’t end, and the severity of the fires and the frequency of the fires are much higher. It’s just the reality of living in California now! 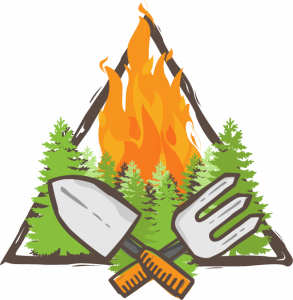