Getting your farm and crew prepared for a disaster like a wildfire can feel overwhelming – but having a plan and Go-Bags ahead of time is a critical step in decreasing your risk and increasing your ability to safely and efficiently respond in an emergency. But what does it really look like in practice? What are the special considerations for farmers and ranchers? For this story, we travel to Glen Ellen, California, to hear from the farmers at Bee-Well Farms who were heavily impacted by the 2017 Nun’s wildfire. Having recovered, they now have sophisticated emergency plans and are prepared for the next wildfire. Here, Melissa will walk you through their emergency response plan as well as share what’s in their Go-Bags (and why)! 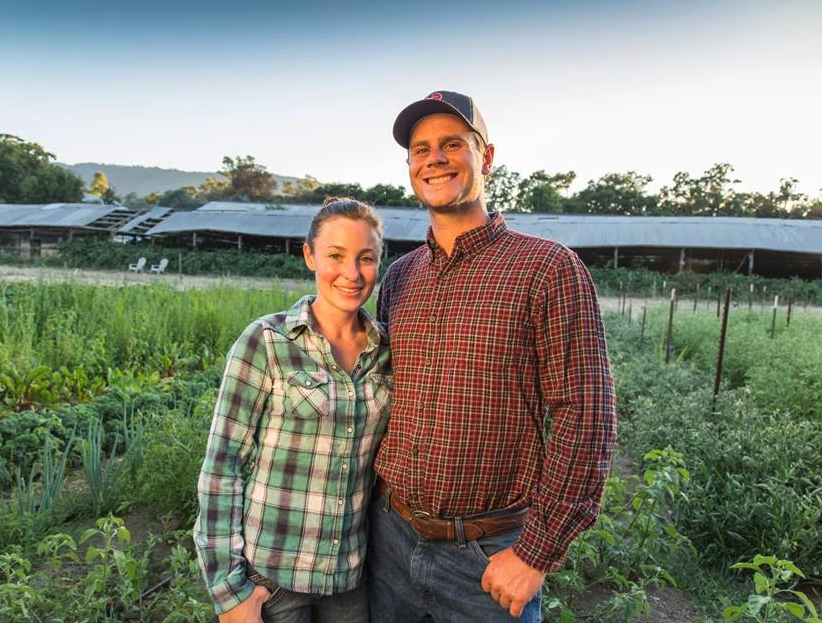 Hey friends! My name is Melissa Lely, and my husband Austin and I are the owners of Beewell Farms in beautiful Glen Ellen, California. We were completely burned out in the 2017 Nun’s fire – we lost our home, hay barn, vehicles, all of our feed for animals, all of our tools and equipment, and our workshop and nearly everything that we owned. At that time, we had really no idea that anything like this could happen to us. And really, we frankly never even thought about it! So we did not have a plan in place and we were absolutely not prepared when the fire came.

Now since then learning from our past experiences, preparedness is key. And we have learned that and know the reality of what it’s like to be in that kind of a scenario, so we wanted to share how we’re adapted and are prepared now.

Getting Prepared: The Basics of a Go-Kit

One of the main things we do to prepare is to make sure we have all our supplies gathered in an accessible area that is ready to grab and go when an emergency strikes. The first thing you want to do in a wildfire is to load all your Go-Kits in a vehicle, load all your pets and your family and go to a safe place. Not sure what to put in yours? Here’s what we have in our larger Go-Kit. This is more extensive than just a personal bag, and is made up of several bins:

We have important documents in their own bin. Business documents, wedding albums, and then all the important files, anything from medical records, and insurance or pets. Addresses and emergency contacts, and anything that would be a pain to try to get again later on. It’s just good to have that in a bin and ready to go.

We have a duffel bag full of our individual Personal Protective Equipment, as well as a change of clothes, a First Aid Kit and toiletries.

We also have replacement filters. We used these during the fire and they came in very handy. The smoke was really thick and awful – it wasn’t just smoke- there were a lot of chemicals and stuff in the air from burning down, so especially the full face masks made us feel much safer.

Power supplies, generator and jump starters for the car

We’ve also included a USB charger, as well as an air compressor. We keep one of those in each vehicle at all times actually.

Extension cords to go with a generator, chainsaw, and gasoline

This comes extremely handy if trees have fallen in roadways or on fence lines and you need to remove those for their access.

We have a bag for my dog. It’s just got some water, food, medical records, a blanket and sleeping pad, contact information as well a leash and collapsible bowl. Just some stuff to help keep him a little more comfortable during an emergency.

Then we have a couple extra hoses with nozzles and fittings. We realized that this was something that we needed more of during the fire, as well as fire extinguishers which we ended up using several times. Now, with the fire extinguishers you need to make sure that they are charged – check them regularly. If they’re not, get them charged or get new ones!

We have a bin with some more extra items that would help for safety: 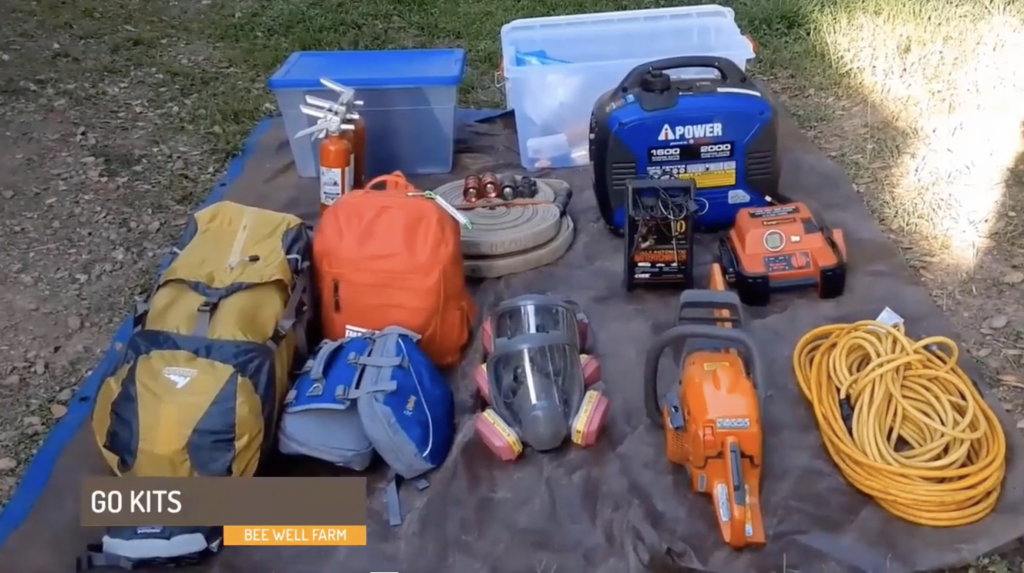 So that is our big Go-Kit! We keep these all in bins and accessible areas. The Go-Kit and the Go-Bags, which has our personal items in it, we keep in our closet and the rest of it is in bins on the outside of the house near the driveway, so we can load it in the car and hurry if we need to.

Emergency Wildfire Plans for Your Farm

For your wildfire emergency plans, it doesn’t have to be anything elaborate. It just needs to be a form that is communicated and agreed upon with the parties that will be involved for your farm.

Since it’s just my husband Austin and I, we came up with just a simple action plan and protocol and the steps we’re going to take in an emergency, as well as one for Planned Power Outages from PG&E. Along with those forms, we have printed out some resources I got from the Emergency Management District in Sonoma County. So your emergency plan is just a helpful packet where you could write your evacuation plan and your sheltering in place plan along with your personal information / contact information. We also have a checklist for what to put in a Go-Bag. For more checklists for livestock and pets, the Halter Project has some excellent resources available for preparing for that and making your farm and ranch ready. 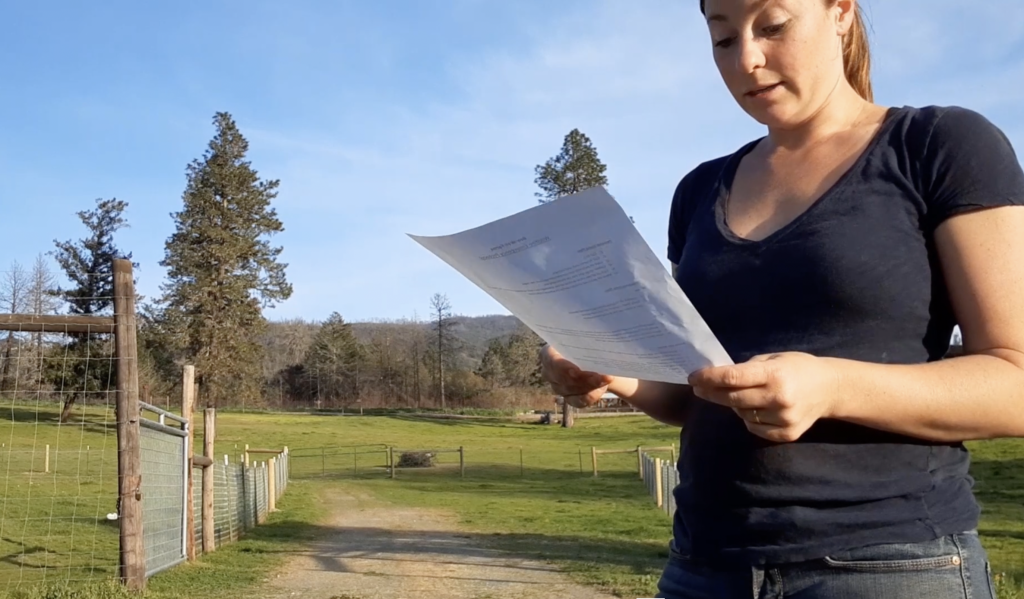 Now, I’m going to walk you through our personal wildfire emergency protocol:

Our personal home plan is number one, because the first thing you need to do is get your home taken care of and your family and your pets and get your go-kits, and leave the house to evacuate.

Usually during fire season, our main field is completely dead grass and dry, so we like to have our cattle in there during that time of year to keep the grass really low and keep the space more defensible. Also, it’s a great location to have them during this time of year because there’s a smaller pasture closest to this side of the fence. If we have a fire, we’re going to call the animals into these smaller pastures, and then they could be closer to us if we need to resort to Plan B to evacuate. There’s also water hookups there and we have a 12 panel portable corral that if we do need to evacuate, we’re going to set that up and then use that to help load the animals onto our trailers. We have a livestock trailer and also we have access to another large livestock trailer, that way we have a couple of options that we have to move them. Also on our emergency protocol we have a couple of places listed where we could take our animals if we do need to evacuate them. It’s always a good thing to list your locations and resources that you have in order to evacuate animals.

Now I’ll walk you through the rest of our action plan. We have it broken up into tasks for each individual, and then things we’ll both do together.

Together, Austin and I are going to move our cattle to Safe Zone One, which is what we’ve named these smaller lower pastures. We’ll prep all the water for this area – there’s a spigot  and we use a water trough with the float so we can have that constantly on. We’re going to contact the Halter Project to help facilitate transportation in case of an emergency. Our plan A is to shelter in place, but Plan B is to move the cattle into the arena which is another safe area with even more defensible space around it. And Plan C actually is to to transport animals to another facility or evacuate them entirely.

At the location where we plan to shelter in place, there’s a fire extinguisher or fire hose hookups there and one on the far side of the barn as well. And this has a lot of gravel around big defensible spaces. During the last fire, we actually stayed and fought off the fire from this area, and it was very defensible and easy to do that from this spot. The horse arena is a big sandy area, and hard fenced all the way around. In the barn, there’s empty stalls, so we have one of those setup with crates and a bed and extra bowls and stuff in order to put our pets in there, which will allow us to work and have them comfortable in an emergency.

Getting Support: NRCS and Insurance

One thing I just wanted to touch on was that all the fence lines here on the BeeWell side actually burned during the fires – we lost all the fences. We actually worked with the NRCS to get grants to replace all of the fences throughout the whole ranch, which now have a secure area now for cattle. We also worked with them to replace the water lines throughout the whole ranch and install a water holding tank so we have backup reserves as well. These are great opportunities if you are affected by a wildfire – contact the NRCS and sign up for these grants. It’s really a huge cost savings, and it would have been an unimaginable thing to have to take on without them. Watch: Farmer Campus video on Post-Fire Recovery: NRCS Fire Mitigation & Recovery Aid.  Learn more: The NRCS has a California Wildfire program whose primary focus is to reduce the immediate impacts of the fires related to soil erosion; hazard trees, accumulation of fire hazard debris, and invasion by noxious weeds. Description of support here.

Additionally, make sure you have proper coverage from your insurance. We were really under insured at the time of the 2017 wildfires, but one thing we learned was how important it is to have everything insured. We have a good policy now and we don’t don’t have to worry about crops during the fire, or tools and equipment or anything like that. All our personal property is covered so if we do lose some of that stuff, that’s okay. That’s what we have that policy for. Now we can focus on our action plans and the things that are most important.

Watch: Farmer Campus’s video series on the basics of insurance >

One of the other things that we do to stay prepared is to work on reducing our fuel load on the ranch. We now live on the neighboring Atwood ranch and we work here as well. Behind us is a forest, and originally there were a lot of ladder fuels, and the fire actually came right down to us. Now, outside of every fire season we work really hard to reduce our fuel load by cutting and burning brush, we chip where we can, and we also use our livestock for grazing everywhere possible.

I hope this helps everybody out and you guys learned a thing from my experience – let’s get prepared!

Ready to get prepared?!

Join the Farmers Build Wildfire Resilience Online Course for more tips, resources and farmer stories! You can also download the (free) Farming through Wildfire Season Workbook, which has templates for emergency and communications plans, as well as information on building a Go-Bag.