Counting the Losses: Tallying the True Costs of Wildfire for Farmers

Being impacted by wildfire is terrifying, potentially deadly, and can be extremely costly. But for farmers and ranchers, there are so many layers to the type of losses they face from not just the wildfire, but the evacuations and power shut-offs that can make recovery almost impossible. It’s important to note what these losses are to properly prepare financially through insurance and to set yourself up for aid in the event of disaster. In this two part photo blog series, we talked with farm manager David Cooper to hear his wildfire story and get a glimpse into the realities of farming with wildfire and how to recover.

Part I: Understanding the True Costs of Wildfire

Though David Cooper was an experienced Farm Manager, nothing prepared him for the impacts on their farm from the Nun’s wildfire in 2017. At two in the morning on October 8th, the wildfire crested the hills five miles outside Glen Ellen, CA. The wildfire burned for 22 days, and was so destructive it resulted in three deaths and 56,500 acres burned and 1355 structures destroyed. In its path was Oak Hill Farm, where Cooper was managing 20 acres of mixed vegetables, flowers and fruit on a larger 700 acre property. “I’m sharing my experience today in the hopes that should you be faced with a similar situation,” reflects Cooper, “you’ll have hopefully learned some lessons that we would have certainly benefited from knowing ahead of time.” He joined Farmer Campus to share his experience, recount the nuanced losses that farmers can face (and prepare for) from wildfire, and share tips and resources for financial preparation and recovery when a disaster strikes. What follows is a photo blog and excerpt from his original talks, which you can see here: Part 1 and Part 2. 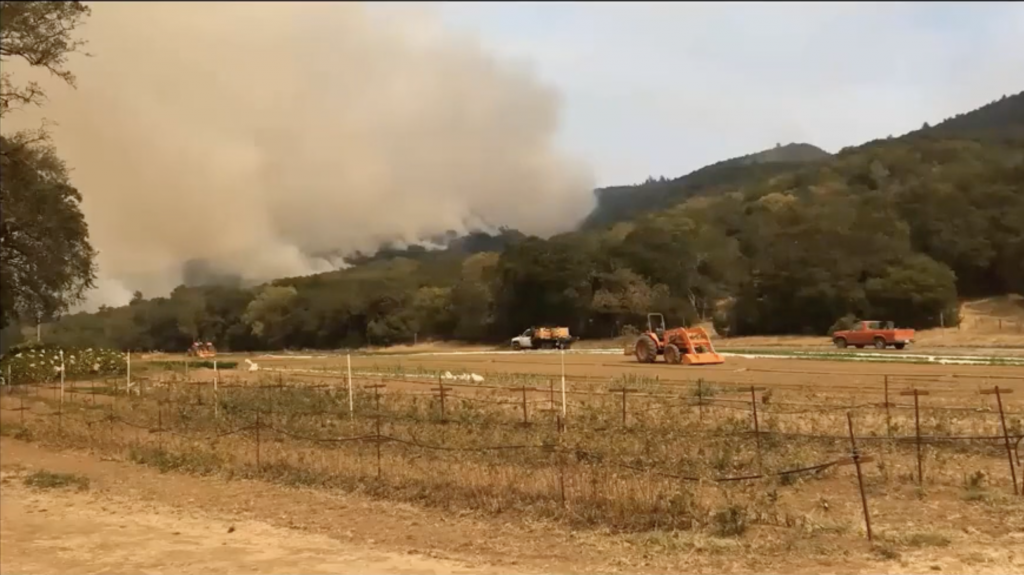 To situate you in place, here are some photos from Oak Hill Farm. In this first photo, the fire crests the hills outside the farm, which it will soon overtake. In an effort to save some of their more expensive equipment, here you can also see a few of their tractors, trucks and other heavy machinery that they had moved out of their storage barns as far away from other flammable infrastructure into these irrigated fields.

Taking an aerial view, this photo above shows how the fire moved through different fields, following fuel loads and unintentional fire breaks – it was a hot, dry October, and their perennial fields were unirrigated. Those fields burned, but you can also see their irrigated fields that they were readying for cover crop, “You can see that the irrigated fields essentially served as firebreaks, but everything that was unirrigated and dry, burned,” David reflects, “and it’s also interesting to note here, you can see seasonal creeks that run through and the fire really followed these creeks, because it was following the fuel load of blackberry shrubs and buckeye trees.” 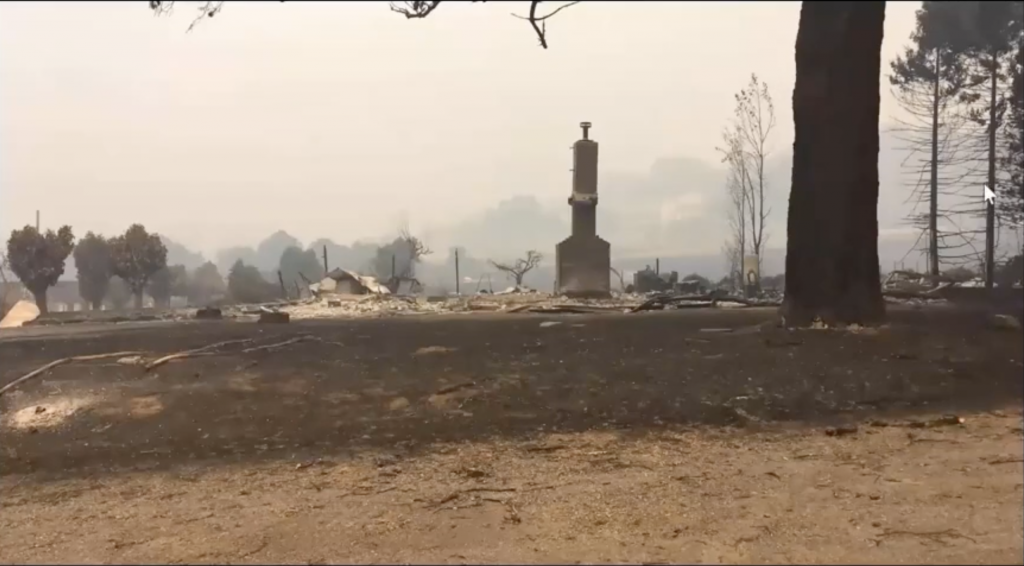 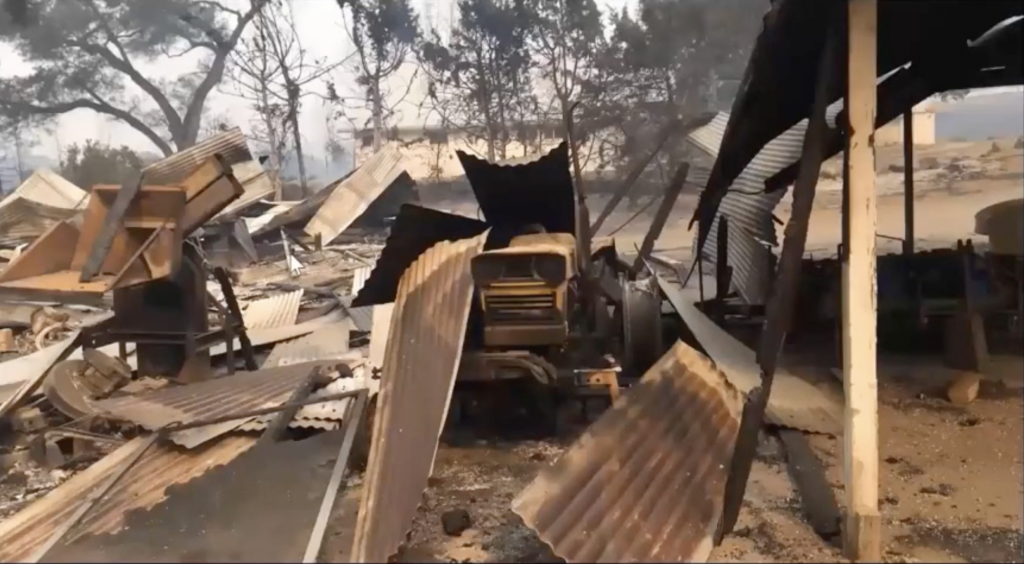 In these two photos, you can see what remained of their old farmhouse, which had been there since the late 1800s (and had even already been through fire before!). “This was all dry grass around it – but this time the farmhouse didn’t make it through.” On the side of the house you can see the remainder of their workshop, “We had some tractors parked in there, we had other equipment, we had wood chippers,” reflects Cooper, “basically the fire destroyed everything in there.” 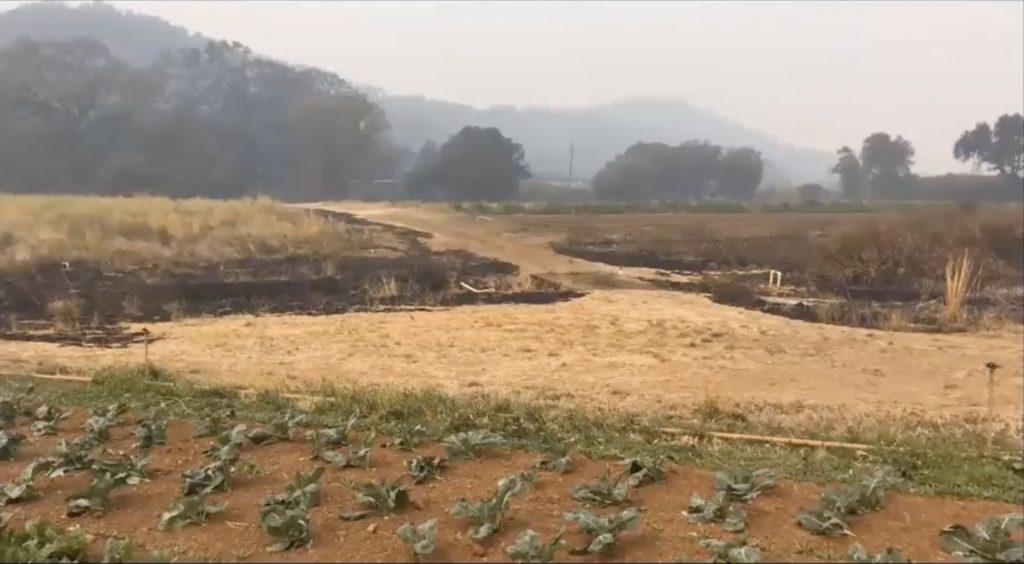 As Cooper mentioned, the fire followed the creeks due to the build up of fuel load on the banks. Unfortunately, farms often also put permanent irrigation lines along their creek banks- which for Oak Hill meant that they lost the majority of their irrigation system infrastructure as well as the lines burned and melted, “So, maybe not the best place to put irrigation! Or if you do, find a way to to try to protect it as well,” Cooper suggests. Amazingly, irrigated crops like these brassicas served as fire breaks to other parts of the land.

Counting the Losses: Tallying the True Costs of Wildfire for Farmers

David Cooper tallies up some of Oak Hill Farm’s losses to paint a holistic picture of what farmers can face after disaster.

We were out of work for 14 days while the farm was in an evacuation zone which cost us about $30,000 in lost sales.

We had products that were stored for the fall - apples and pears and carrots and roots already in our walking that were stored. We lost the majority of that when we had no refrigeration.

That acre and a half of perennials burned, which is worth somewhere around $10,000 in sales annually. Some of those ended up coming back, but that was immediate lost sales for that year. It took about two years before those crops started to produce anything again.

Our seed supply was stored in our workshop, so we lost the majority of our farm seed that we had for that year as well.

We lost the farmhouse which was housing for two farm employees. Some other outbuildings had redwood water tanks that were up in the hills so we could use gravity to not have to pump from them. We lost those and then when the workshop burned, all the equipment that was stored in there or near it burned: tractors, walk-behind tractors, air compressors, welders. Of course there was 800 gallons of diesel too, power tools, and hand tools in there. When our power came back on, our walk-in cooler was still plugged in and so that surge of power fried our compressor as well. And, our irrigation systems and supplies!

The farm had perimeter deer fencing - and like I mentioned the entire farm is surrounded by native oaks and plants. It being October, it was extremely dry so the fences that ran right along the farm and the wild lands burned from the fuel load - that meant miles of our deer fencing. It was all metal and wood posts and so all the wood burned, and it even got hot enough so that a lot of the metal was destroyed too.

The farm was essentially surrounded by wild lands, with oaks, creeks and streams, and even a couple of lakes as well. We farmed directly with nature. The 600 acres of native woodlands basically all burned, so we lost hundreds of oak. And even though they’re fire adapted, it got so hot we lost a lot of our Madrone trees, Bay laurel and Manzanitas too.

"So, we've gone through the fire and now what do we do? Once the fire was contained, we were able to get back into the property had to start thinking about the recovery side of things..."

How did Oak Hill Farm Recover?

Head over to Part 2: Financial Recovery After the Fire with David Cooper
Read Now